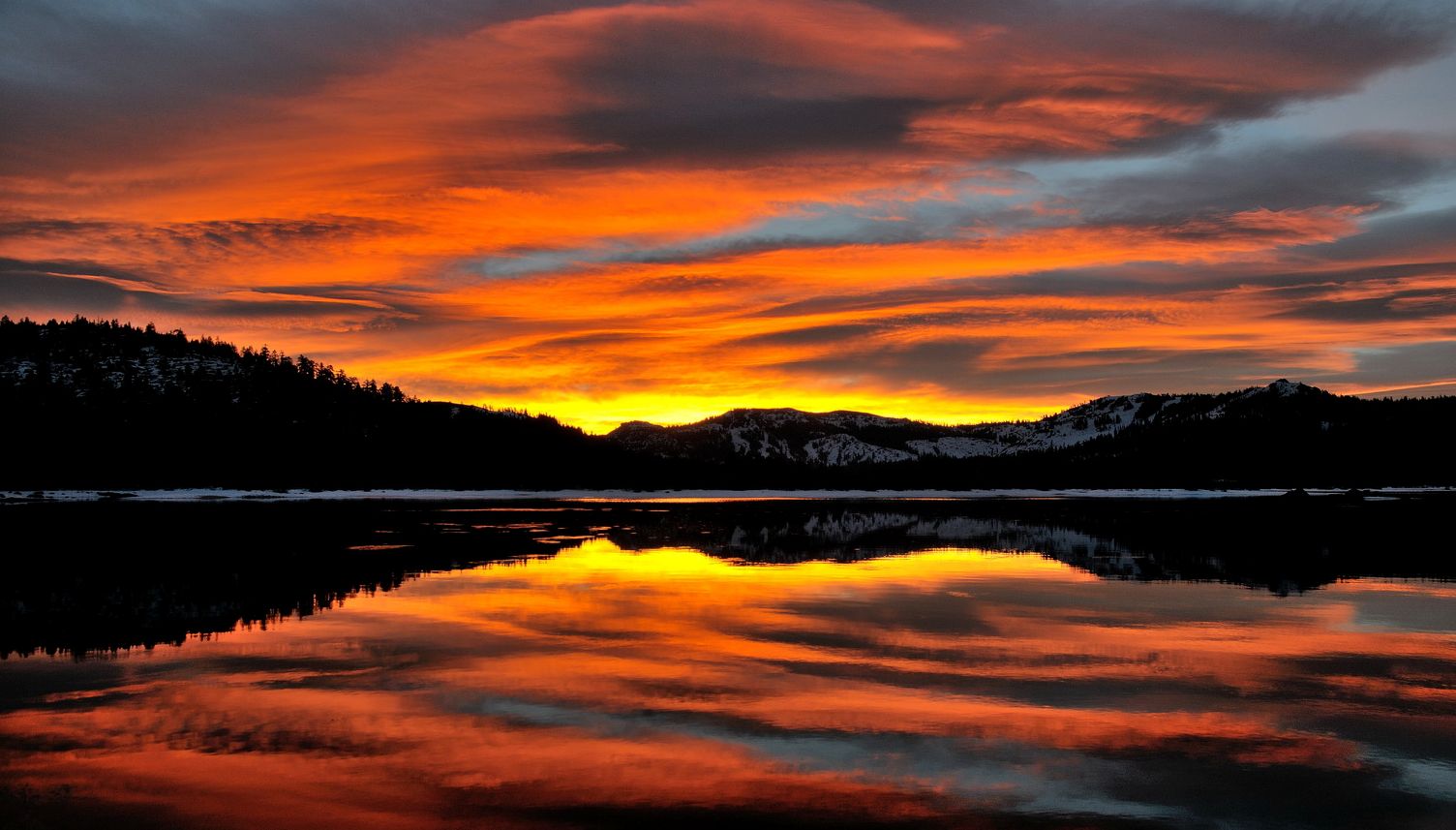 (5/21/14 Update – I have had several people comment that TDLT did not intentionally set out to mislead people concerning the lake. To be fair, this is true. However, it is also true that whether intended or not this has effectively turned into a classic case of bait and switch)

You have probably seen this iconic image of a sunrise at Van Norden Lake. If you don’t remember where you saw it, here it is on the 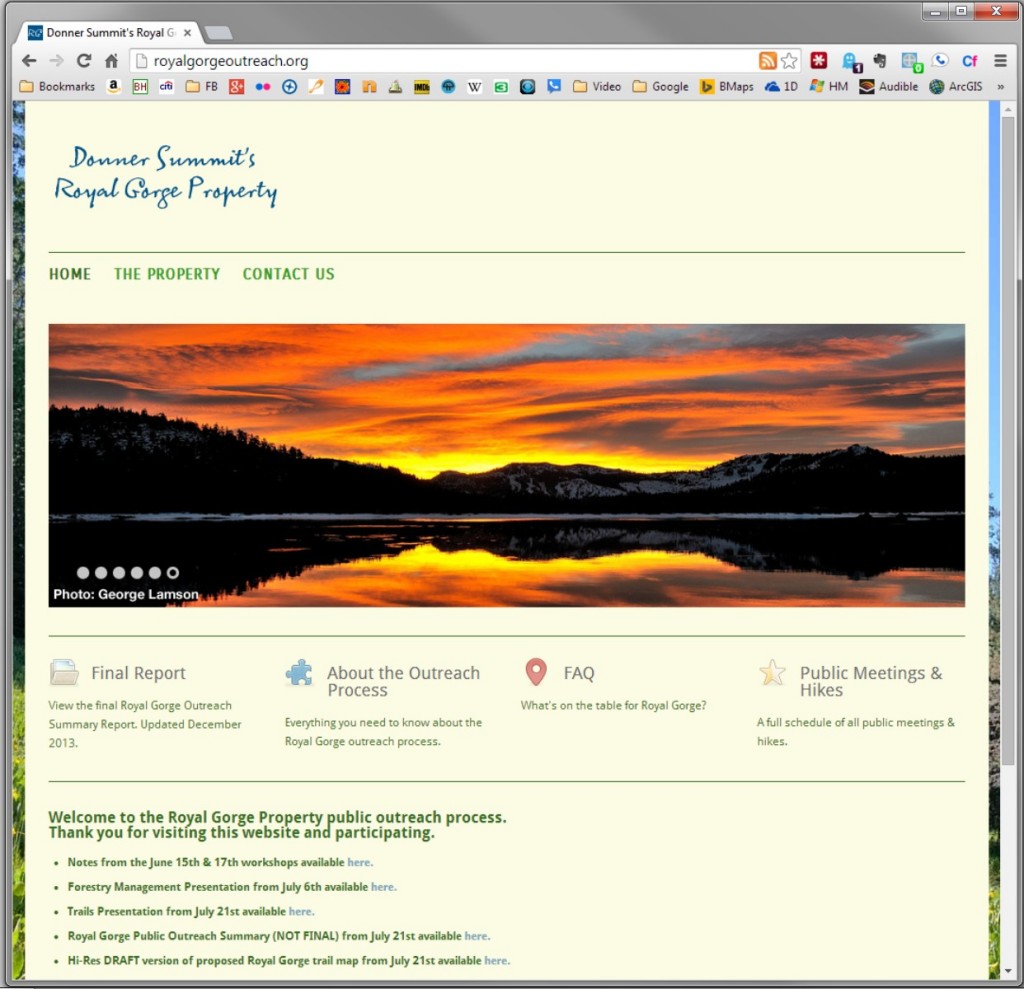 web page on the Truckee Donner Land Trust (TDLT) Royal Gorge Outreach website.
It was just one of many of my photographs of Van Norden Lake that were used by TDLT in their fund raising and outreach program for the Royal Gorge Properties. No one supported their cause to conserve the Royal Gorge porperties more than I did. The promise was that the lands would be preserved and saved from development for the enjoyment of all of us. Implicit in that promise was that the Summit Valley including Van Norden Lake and Meadow would be preserved as the beautiful natural resource that it is. That was reinforced by many other images on their website and in their fund raising material like the image of the lake that is the current banner on their Facebook page. How many times did I hear in speeches by various “conservationists” that the lake and meadow were going to be preserved. There was also the slide in their presentation on the “Crown Jewel of Van Norden” in which they explicitly set the goal for preserving Van Norden Lake. 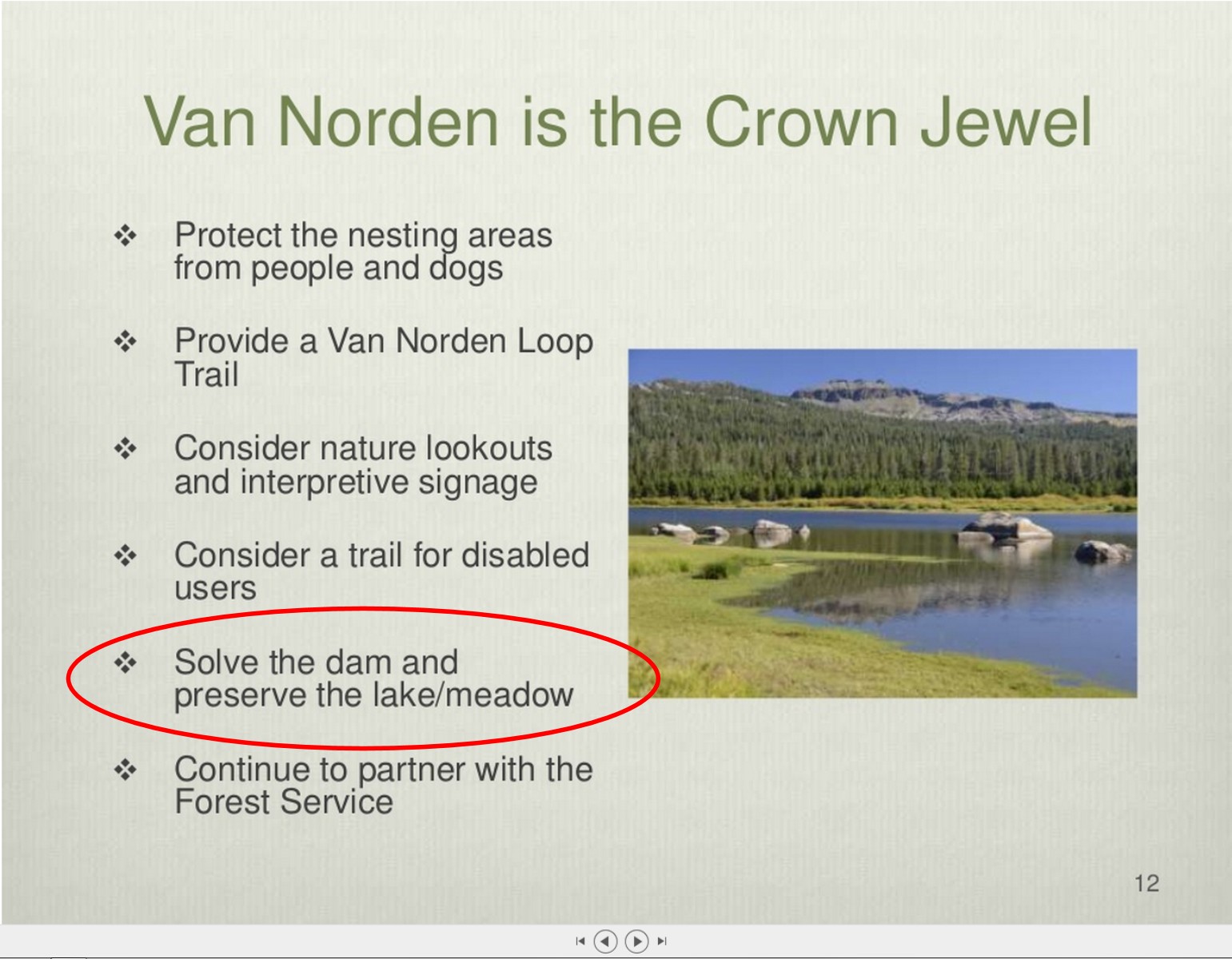 That was the BAIT! (And we all gave our wholehearted support for the acquisition)

This week we learned of the SWITCH.

TDLT revealed their plan for “fixing” the Van Norden Dam. The “fix” is to remove the Crown Jewel, Van Norden Lake. They plan on notching the existing dam 5 feet which will effectively drain the over 100 acres of lake and wetlands area down to a 2 acre puddle. This drastic move will remove the most biodiverse habitat in the Summit Valley as well as one of the most scenic landscapes in the Sierras. The purpose of this site has been to preserve as much of this natural resource as possible and we were hoping to save most of it with our two lake solution.  TDLT claims that they are doing this because the lake poses a public safety risk and there is an issue over water rights. This doesn’t make sense in light of the fact that they have shown in their own studies that they can lower the dam 2.3 feet to reduce the volume the lake to less than 50 acre-ft which will remove it from state jurisdiction and still maintain about 30 acres of lake and 30 acres of adjoining wetlands. The 50 acre-ft limit has been implemented by the state because they do not consider lakes below this limit of being a risk. With regard to water rights, the lake has been in Summit Valley for over 100 years and its current configuration for over 35 years. There was never any water rights issue before. And why did TDLT pay $10,000 to SLCWD for them to grant water rights to TDLT for the Summit Valley?

It is much more likely that the motivation for this drastic plan is the pressure put on TDLT by the US Forest Service. The Forest Service is planning on acquiring the land in the next two years and have told the Land Trust they do not want a dam on the property. I think part of this is bureaucratic expediency and part is the current “trend du jour” in the Forest Service to remove dams. It is true that there are many dams in the US today that really don’t provide value to the environment and could be removed. Unfortunately, this trend is also effecting dams that actually enrich otherwise less bio-diverse habitats such as Van Norden Dam. There has been a rush to restore meadow habitat in the Sierras after exploitation from logging and mining. In the case of the Summit Valley, however, there is a thriving meadow habitat in Van Norden Meadow that is complemented by an equally thriving alpine lake and wetland habitat that is even rarer in today’s mountains. It is hard to understand the logic in removing the rare and bio-diverse lake/wetland habitat and replace it with a less bio-diverse habitat that already exists in the majority of the Summit Valley. The idea that this valuable habitat should be lost so that the Forest Service won’t have to worry about maintaining it is even more troubling.

The bottom line for us is that the removal of Van Norden Lake goes against every intention that the whole effort to preserve the land engendered. The reason the lake was such good bait is because it is indeed the Crown Jewel of the Summit Valley in so many ways. Removing the Jewel will diminish the natural experience for all of us. We intend to fight this short sighted move and would welcome any support in this endeavor. Please contact us if you would like to help. Also see what you can do.