When the snow gets in the way

Most people coming to the summit area know that it is a “snow magnet”. For most that is the reason they visit or live in the area in the winter. In fact, Donner summit gets some the heaviest snowfall of any residential area in the United States. The graph below tells the story. December through April is the heavy snow time with a snowbase on the ground averaging 8-12 ft. As with most things, this heavy snowfall is a two-edged sword. While it means plenty of snow for winter activities, it also requires a huge undertaking to keep the snow out of the way of enjoying those activities.

Snow removal on the summit is a very big undertaking encompassing the state of California, Placer county and no less than 5 independent companies to keep the roads and driveways clear of snow. Fleets of snow plows, loaders, snow blowers, and trucks are involved in the effort. An army of operators for these fleets are required to work long hours under grueling conditions to make it possible for you to drive from your cabin over to a ski resort and enjoy a great day on the slopes. Needless to say this is not an inexpensive proposition, but without it, there would be no winter sports economy on the summit. 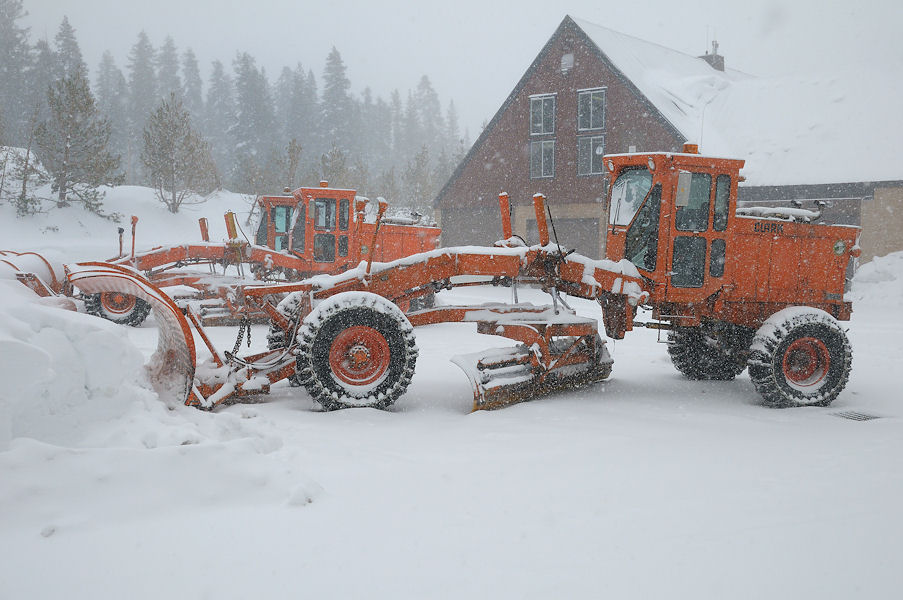 Although everyone coming to the summit has some experience with the snow removal effort, not many people realize how this big job gets done. So how does it work? There are 3 basic jurisdictions of snow removal, each run by different agencies and utilizing different equipment. Highway 80, the main artery to the summit is the responsibility of Caltrans, Highway 40 and the public roads are handled by Placer County and Sugarbowl ski resort, and individual driveways of homes and businesses are contracted to private companies.   Road and highways utilize large snow graders and blowers, while driveway companies use smaller “put put” blowers exclusively. There are two stages involved at all levels of snow removal. During the snowfall, the goal is to keep the snow on the ground clear enough to allow an auto equipped with chains and/or snow tires to operate safely. During heavy snowfall this can be challenging and requires continuous passes over the roads. During this stage plows are used on the roads and the snow is really pushed aside on the roads leaving a berm of snow along side the road (more on berms later) and not really removed. 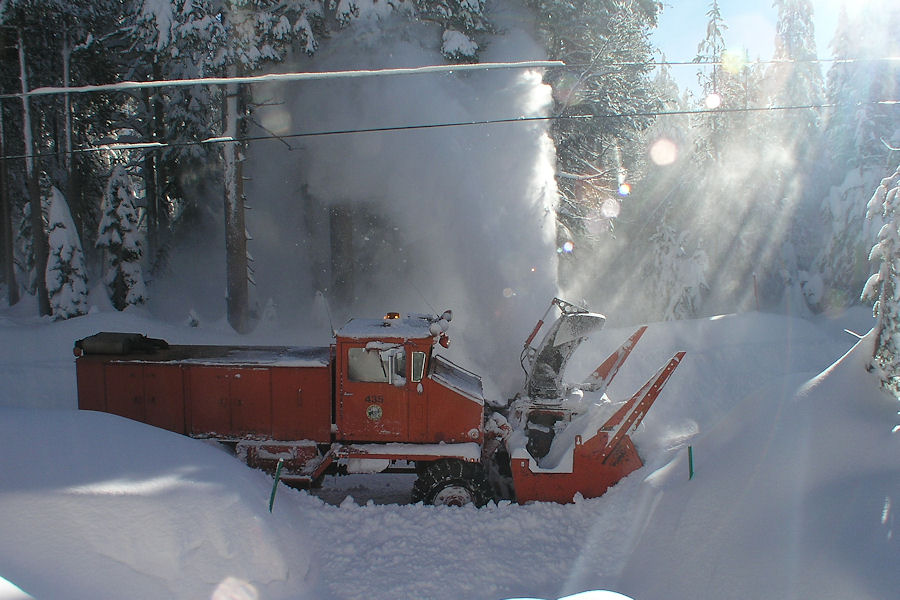 In really heavy storms, there may only be a single pass down a road by a plow leaving only a 10-12 ft open path. This can make driving in these conditions a dicey proposition. Once the snow stops falling the actual removal phase occurs with large snow blowers blowing the snow clear of the roads. It may take a couple of days to a week after big snowfalls before the big blowers get all the roads back to their normal widths. 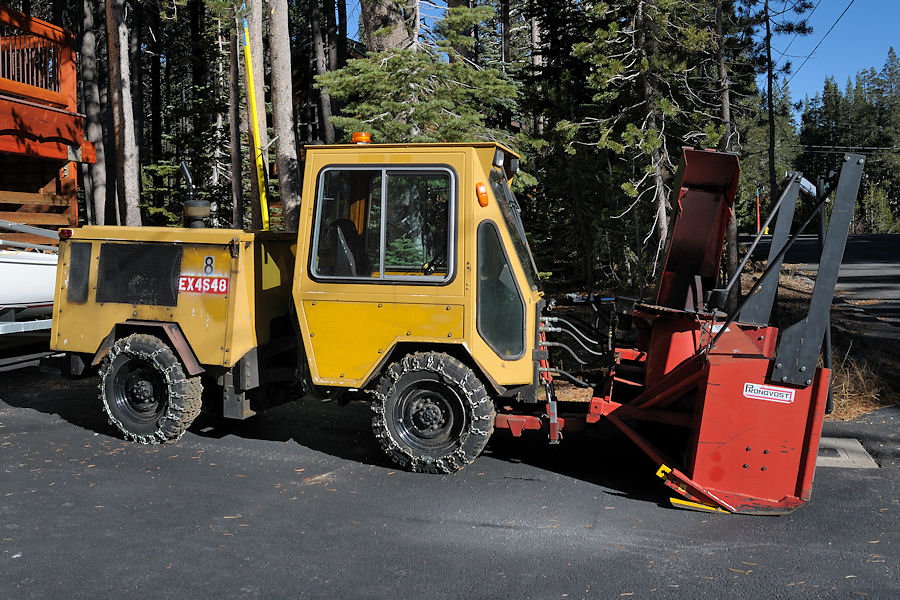 The situation with driveway clearance is somewhat different. Clearance of the roads is first priority and the driveway companies must operate in deference to the road clearing equipment. Practically that means the not only must the driveway be cleared of the snowfall, but also the berms put up by the road clearance must also be removed from the entrance to each driveway. As most residents know, the “berms” can be much worse than the snowfall itself. In large storms with heavy snow it is not unusual to see 3-6 ft berms in front of driveways. This can be a real challenge to the smaller “put put” blowers used to clear driveways. They are really designed for handling moderate snowfalls, not the really heavy dumps that the summit can get.  A 3-4ft fall can really tax the equipment and can dramatically increase the amount of time it takes to clear a driveway. Fortunately, most snowfalls are more moderate with about 4-12 inches falling which can be easily removed by the blowers. However, there is another factor that can hamper keeping cleared driveways. As the snow season progresses, the snow removed from the streets and driveways builds up alongside and by march the streets and driveways can form “canyons” with walls 10-20 ft high. As this article is being written in March, this is the case. The smaller snow blowers have a pretty good throw, but for many driveways where cabins are close together, there may literally be no where to blow the snow. This means the operators may have to get creative in where they put the snow. The consequence of this is that it will often take longer to clear a driveway and may be harder to maintain the total width of the driveway.

So how does this all work for a typical storm that drops a foot or two of snow overnight.? The system really revolves around keeping the roads open for people to be able to get out to work and over to the ski resorts for a day of skiing.  Caltrans will be out plowing Hwy 80 and putting up chain controls if necessary. Placer county will have its large grader plows out clearing the public roads in Soda Springs and Serene Lakes and Sugarbowl will have its large plows clearing Donner Pass Road. The goal of the driveway companies is to have residents driveways clear by 7-9 am to allow residents to get to work or in most cases get out to a ski resort. That means that the operators get out and start clearing driveways between 4 and 5 am . Most operators have 30+ driveways to clear on their “routes” and depending on snow conditions, this can easily take 2-4 hours. In a perfect world, the county plows would have the streets cleared first and then the driveway blowers could come and remove the berms and clear the driveways. In the real world, it is more likely that snow conditions often mean that the roads may not be cleared until 7 or 8 am. This means a residents driveway will be cleared, but will have a berm across it. It is necessary therefore that the driveway operators do a second run to remove the berms. If the snow continues during the day it will necessitate that the roads and driveways be cleared again to allow returning skiers to get back to a warm cabin after a hard day on the slopes. For the usual snowfall this system works amazingly well. I am often amused when I see headlines that 6 inches of snow at a city in the east will “shut down” the city. The summit area can get 1-2 ft of snow overnight and the roads are clear by 9 am.

It is important to realize however, that when the snowfall gets really heavy  and sustained (6-10 ft in a weekend is not uncommon), this system can not keep up. With really heavy snow there is not enough time and space to keep the roads clear and it can take 5 times as long to clear a driveway meaning not all the driveways can be cleared by 9 am. Most times that can still work because in the summit area, only a small percentage of the cabins are populated at any one time. In heavy storms the driveway operators prioritize to keep the driveways clear for cabins that have “signs of life” (a tip here is if in a big storm you are at your cabin and you park in your garage, you turn on a night light that can be seen from the street). Of course the worst case scenario is a heavy storm on a crowded weekend, in which case patience may be the only alternative.

Visitors and residents of the summit area are fortunate that it is such a winter playground. They should, however, be aware that without the extensive snow removal infrastructure, the playground would still be here, but there would be no way to get to it.