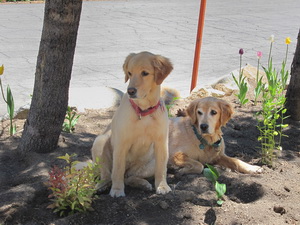 This post is a cautionary tale to all the dog owners that visit the summit. Anyone that frequents this site probably knows that we have two golden retrievers that we share our lives with up here on the summit. Calla (pronounced kaiya) and Maggie are two of the greatest dogs on the planet and love the summit life, both summer and winter. It is a great life for a dog, but it can have it’s down side and this week we discovered a serious one.

Our story begins in the last week of June while I was working out in our yard at our cabin. Calla and Maggie like to lie out in the flower beds in front of the house and watch me work when I’m out front. We do not let our dogs out front except when we are out there to keep an eye on them. They normally stay in our cul de sac and really aren’t roamers. So I was surprised when I noticed that only Maggie was lying in the driveway and when I called Calla, she didn’t come as she usually does. After a walk around the cul de sac I still couldn’t find her so I expanded my search and walked over to Lake Serena which is a block over from our cabin. I still didn’t see her but luckily Maggie came with me and she spotted Calla down on the shore of the lake and guided me to her. When I got within about 30 yards I could see that Calla was doing her best rolling behavior on something on the shore. Golden retrievers have the “rolling” gene, which is an innate behavior that many dogs have where they roll in disgusting smelling things to mask their scent. When I got within 10 yards of the shore I was struck with the stench of rotting fish and it became clear what had enticed Calla to the lake. Golden retrievers also have great noses and Calla is a scent dog extraordinaire. I’m sure she smelled that fish all the way from our cabin. I called her when I got close and she immediately came out of the thicket she was in. The smell was overwhelming. I took her home and immediately gave her a bath to reduce the smell to a livable level. Needless to say after this we kept her on a leash when we took her out front. 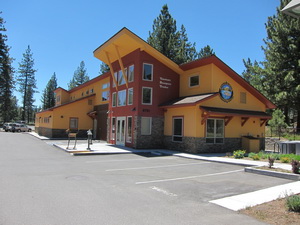 Fast forward to Saturday night of July 4th weekend. We had some old friends visiting and had the BBQ going and I was just about to feed the dogs before we sat down for dinner. I grabbed the can of Pedigree out of the fridge and Maggie came running as usual (they are tuned to the sound of the refrigerator door). As I started downstairs I realized Calla wasn’t there. I called her to no avail. I looked around the house and found her lying under the table. She was lethargic and had absolutely no interest in eating. Calla is a dog that is eternally hungry and never misses a chance for food. I knew she was in trouble. A quick call to the Donner-Truckee Vet Hospital emergency vet in Truckee and I was on my way with her down to the hospital. A quick exam found that she was running a 105.4 degree temp (normal is 100-102). This was serious and they immediately got her into a cooling bath and started her on subQ fluids. The emergency vet (Vet#1) suspected heat stroke, but that really didn’t make sense because she never really got that hot. She spent the night in the hospital.

Her temp came down to 103 the next day and she came home in the afternoon. For the next two days her temp hovered in the 103-104 range and she still had very little appetite. On Wednesday the 4th she started vomiting and back she went to the emergency vet. This time they took pics of her gut and the vet (Vet#2) saw some things in her stomach that he thought might be causing a blockage. He indicated that he might have to operate, but suggested we wait until the next day when the full staff would be at the hospital. That evening I got a call from the night vet (Vet #3). She thought we should do exploratory surgery right away. I asked if Calla was in immediate danger and she said no, so I told her to wait until I talked to our regular vet, Dr. Otten the next day. I was at the vet the next morning when they opened and consulted with Dr. Otten (Vet#4). He looked at the xrays and didn’t think there was a blockage, but he thought that he would probably have to do exploratory surgery to look for an infection if her fever continued. He also asked me what I thought was a stange question at the time. He wanted to know if she had eaten any raw Salmon in the last couple of weeks. I said no and asked him why he wanted to know. He told me there was a condition called Salmon poisoning. I didn’t really think that more about it there because I knew she hadn’t had any raw Salmon. The plan was to operate on her that afternoon and I left her at the hospital.

As I was driving home everything was going through my mind when I thought again about his question about the raw Salmon. Then I remembered the stinky fish episode from two weeks before. When I got home I googled Salmon poisoning and found that in fact it is a bacterial infection that is transmitted from a trematode worm vector that lives in a snail that infects Salmon, trout and other migratory fish in the Pacific Northwest. More importantly, it can be fatal to a dog if it eats the raw fish or even licks the raw fish. So how is a disease of fish in the Pacific Northwest related to my sick dog. Well, we happened to know that on June 21st Serene Lakes was stocked with trout. It turns out that the fish come from Oregon. The stinky fish episode happened a couple of days after the stocking. Voila, Calla had eaten a raw fish from the Pacific Northwest. I immediately phoned the vet and told him of the stinky fish episode and the fish stocking. He cancelled the surgery and put her on a big dose of tetracyline (the appropriate antibiotic for the fish bacteria) and gave her a good dose of a de-worming drug. After a subsequent fecal analysis the presence of the worm was detected thus confirming the entire scenario. 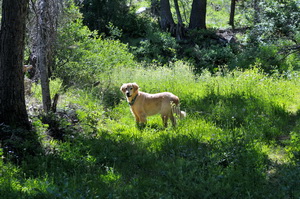 As I write this, Calla is back to her old self. The fever is gone, she is eating voraciously again and she is out running around and joining us on hikes. She will be completing her course of antibiotics and de-worming drugs in the next two weeks. I found out from the vet that the reason he asked me about the raw Salmon was that he had seen a case similar to Calla’s about 6 years before, when a dog had eaten a raw fish near a stocked pond over near Donner Lake. This is a story of unbelievable timing and coincidences that almost ended in tragedy. If our vet had not happened to see this previous case and that fish that Calla had eaten hadn’t been so stinky and left a lasting impression and we hadn’t know about the fish stocking from Oregon, we probably would have operated on Calla to no avail and she would probably still be sick or worse.

There are many take home lessons from this tale. Letting your dog roam the neighborhood is not only a bad idea because of the impact on your neighbors, but it can also be dangerous to your dog. We are not letting the dogs go out front now without being leashed or under very close supervision. Veterinarians are human and don’t always get it right when the health problem is difficult to diagnose. There is no substitute for the experience of the vet. We were fortunate to avoid a dangerous (and costly) surgery that would have been completely fruitless. For dog owners in the summit area, be careful that your dog does not eat raw fish from any lake that may have been stocked with fish. Don’t feed your dog fish cleanings. If your dog exhibits lethargy, no appetite and/or vommitting and a high temp, get to the vet right away. You may not have seen your dog eat the fish as we did, but if you see these symptoms, make sure you mention the possibility of Salmon poisoning to your vet.

After reading this you may be wondering about the safety of the fish to humans. Humans can be infected by the parasite if they eat the fish raw (trout sushi is not a good idea) and it is also possible to be infected by handling or cleaning infected fish. Fortunately, infection by the parasite will only cause mild intestinal symptoms such as diarrhea in humans. IT IS NOT LIFE THREATENING as it is in canines. However, it is highly RECOMMENDED that you practice good sanitation when handling raw fish. Here is the Sierras we do not have the snail that serves as an intermediary host for the worm so the disease is not endemic. The snails only live in coastal migratory rivers and streams. However, the importation from Oregon and Washington of fish for stocking the lakes can also import the worm as this incident clearly demostrates. I’m not sure why we get our fish from Oregon, but getting them from somewhere else where this parasite does not live may be something to think about?