The good news about this post is that it is going to be short because there really isn’t much history to talk about. This post is a follow up to my previous post concerning fire on the summit. In that post I made the argument that fire was rare on the summit because of the high altitude, heavy snowpack and rocky terrain of the the Donner Summit are. At the time I wrote that post I did not really have the historical information to support my argument other than the fact that nobody that I talked to (including some of the old timers) could remember a fire in the area. Thanks to Linda Ferguson, a Fuels Specialist with the Truckee Ranger District, who sent me an historical map of wildfires in the area (see Figure 1), I now have the data to confirm the rarity of wildfires in the area. Consider the fire history map in Figure 1. 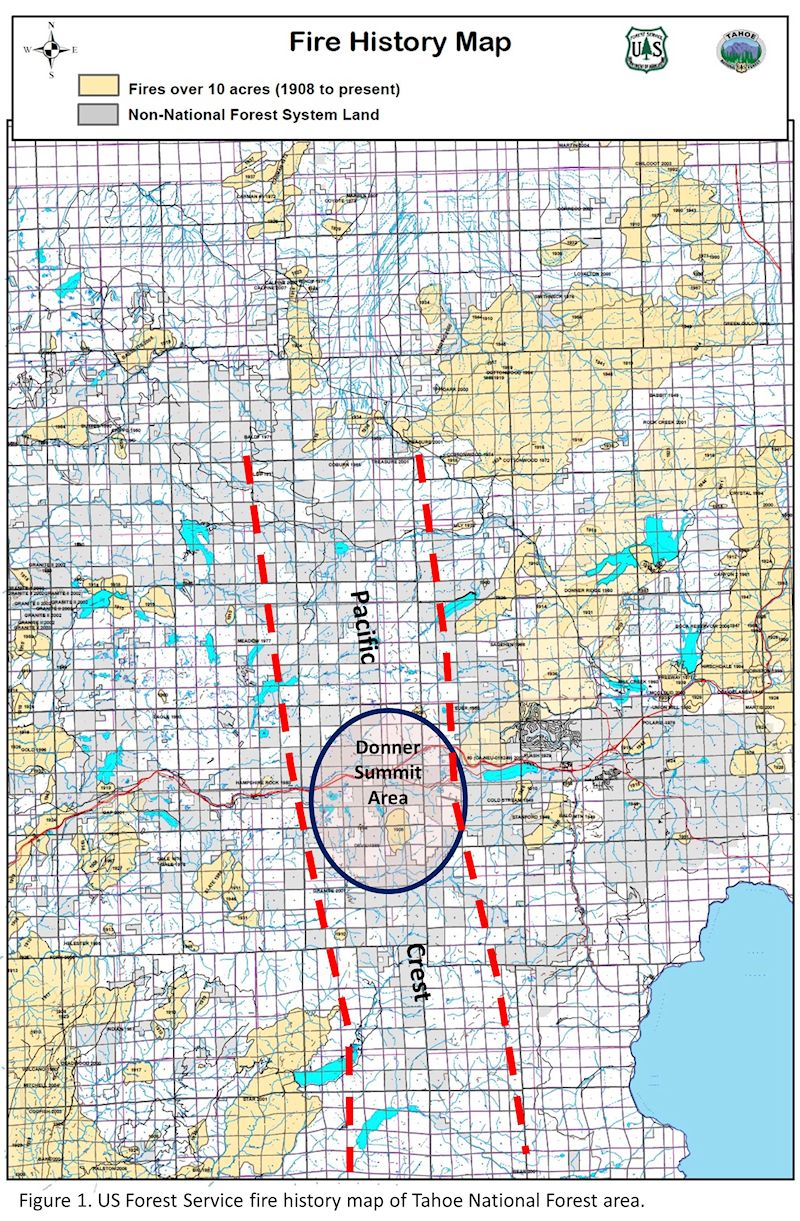 Keep in mind these facts; The map only covers back to 1906 when record keeping started, and, Fire suppression in the area started in 1906. Granted that we really don’t know what the fire patterns were before 1906, it is clear that there have been many fires in the Tahoe National Forest since 1906. It is also clear that the Pacific Crest corridor, where Donner Summit is located, has been almost totally clear of wildfire activity. This goes along with the argument that fire is rare because of the natual conditions of the Sierra crest area.

If we look at the Donner Summit area in more detail as illustrated in Figures 2 & 3, we see that in fact the largest fire recorded in the Sierra crest corridor did occur in the Donner Summit area. There were in fact two fires that occurred, one 1100 acre fire in 1908 and one 38 acre fire in 1954. To visualize where these fires actually burned I overlaid the contour map onto the satellite imagery in Google Earth and produced the map in Figure 3. 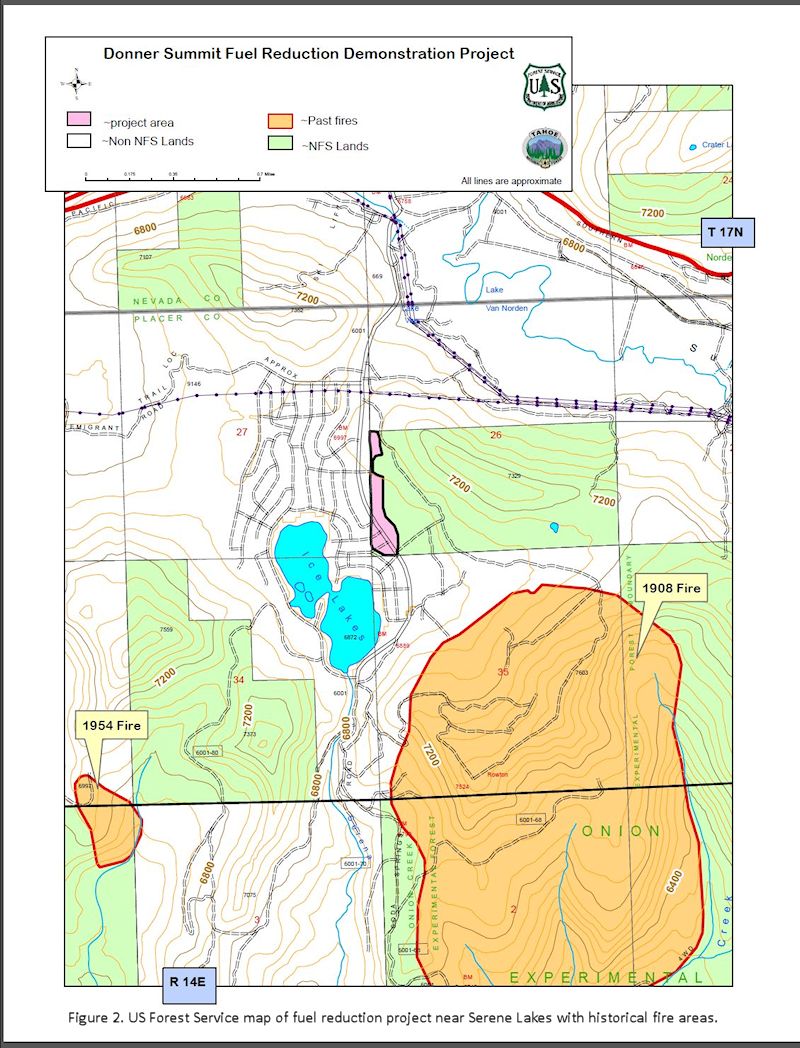 The fire in 1908 was a relatively big one and it actually burned part of the Serene Lakes basin and was less than a quarter mile from what is now a residential area. We don’t know where the fire started or which way it spread but this fire does establish the point that a large wildfire can burn on the summit. I have no information on the causes of the 1908 fire but the only human activity in the summit area at that time was probably logging. The ignition source could have been related to a logging accident or it could have been a lightning strike. We also don’t know if the fire was actively fought or if it burned out on its own. The area was pretty remote in 1908 and fire fighting resources were scarce in those days, no aerial fire suppression bombers. The 38 acre fire in 1954 was located in the Palisade Creek basin where the Snow Mountain warming hut is currently located. This was probably ignited by a lightning strike. In 1954 the area was still very remote and it is unlikely that firefighters at the time would have been able to get to the fire quickly. It is likely that the fire probably burned itself out.

While the lack of fire in the area is good news, it does not mean that the summit is off the hook. In fact, because there has been no large fire in the area for over 100 years, it means that the fuel loads in the area have grown dangerously high. Data from the Onion Creek Experimental Forest indicates that forest densities are double what they would be if there were normal fire cycles. The big unknown is what the effects of global warming will be on the summit area. Less of a snowpack could mean much dryer summers, and longer, hotter summers would mean more volatility in our forests. The efforts that underway by the US Forest Service, SLPOA and the Truckee Donner Land Trust to thin the forests in the area of their excessive fuel loads should proceed at full speed. This is the only way we can insure that we can continue to make wildfires a rarity on the summit.