The King Fire – why Donner Summit should be concerned 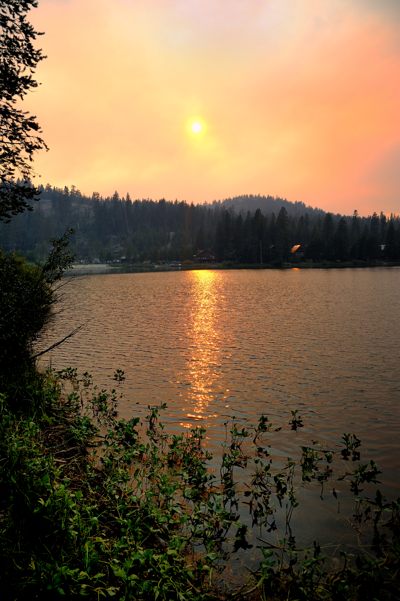 For the last week the summit has been inundated with heavy smoke from the King fire which was an arson started fire near Pollock Pines along Highway 50. Unfortunately for the summit we lie northwest of the fire and the prevailing winds have been from the southwest. As the fires progressed towards the summit heavy smoke preceded it. On Wednesday, Sept 17, the smoke was so thick that it was completely dark by 4 pm in the afternoon. In addition the whole summit was coated with a layer of ash. Miserable is the word that describes it best.

While the smoke has made life on the summit uncomfortable, it is not the real worry about this fire. In a previous post discussing the threat of wildfire on the summit, I described a situation in which a wildfire approaching from the south (or southwest) that came up through French Meadow and into the Cedars would be the worst case scenario for Serene Lakes. In the map below it is clear that the King fire could fit this scenario to a T. One of the reasons this fire was so big and so fast is that is burning up a fuel corridor that has not burned for the 100 years they have been keeping records. Unlike the American Fire down in Foresthill last year that would have had to burn though forest that had already had significant fuel reduction due to previous fires such as the Star Fire in 2001, the King Fire is burning through that 100 year growth.Coupled with one of the worst drought years in recent memory, this fire virtually exploded up the canyons of the South Fork of the American River as it ravaged fuel that has been building up for a century. That is one reson that it covered over 24 miles in 3 days. 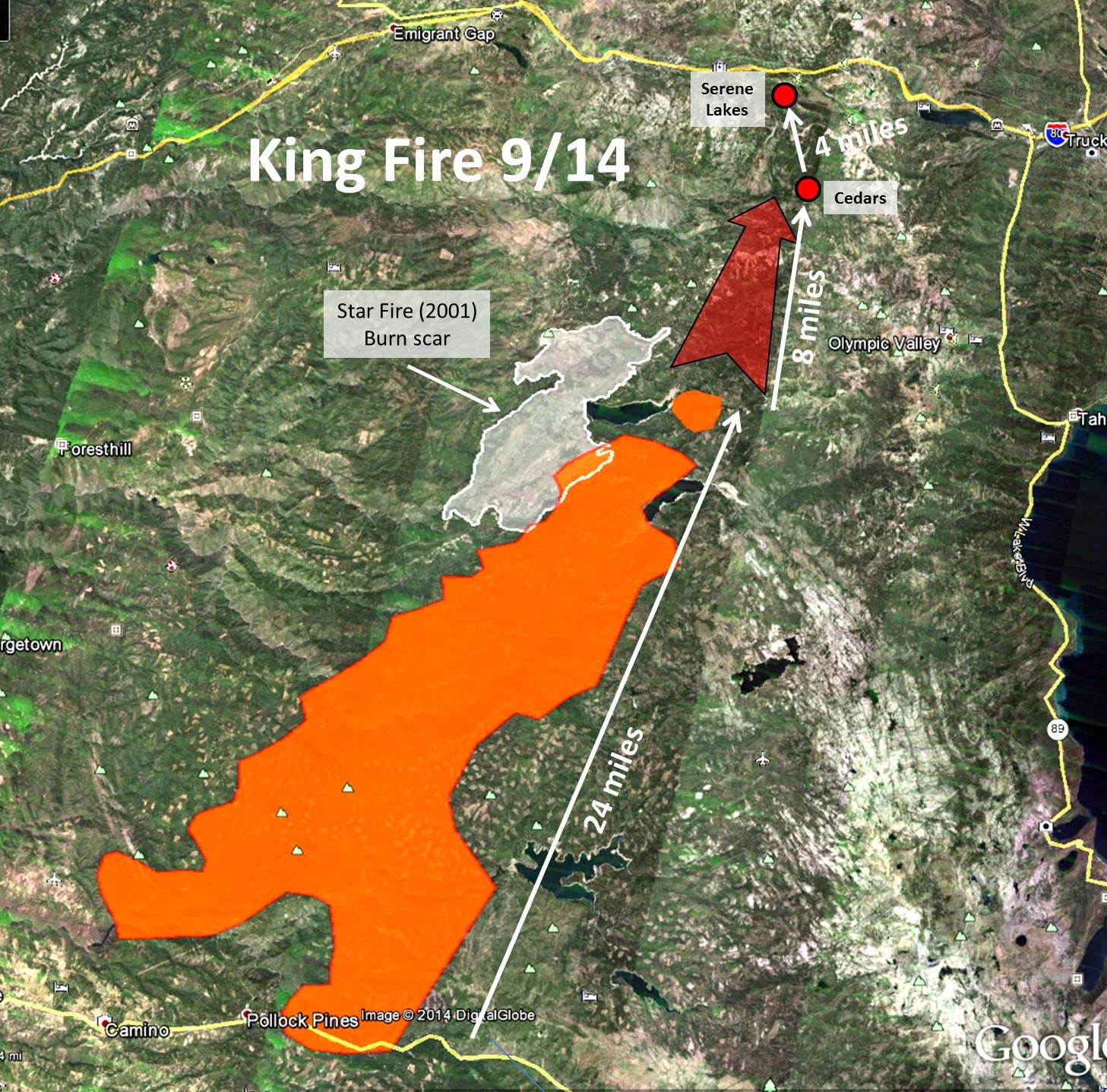 Unfortunately, that same fuel corridor continues directly north from French Meadow up over the Foresthill Ridge and down into the Cedars. The scary thing is that with the right kind of winds temperature and low humidity, once the fire gets to the Cedars it has the potential to charge up Serena Creek Gorge and up through Onion Creek to threaten the community of Serene Lakes. In a normal snow year, the trees would still contain significant moisture even at this time of the year, but with the low snow this year, the trees are all showing drought stress and will be less resistant to buring. If the fire does get to the Cedars, Serene Lakes will come under the threat of hot embers carried forward of the main fire. These embers are the real danger because they land on wooden decks and patio furniture and start cabins on fire.

Fortunately, the firefighting agencies have also read the maps and they are currently sending men and equipment to create breaks and backfires to prevent the fire from getting past its current bottleneck between French Meadow and Hell Hole Reservoirs. We are also fortunate that the weather has cooperated with relatively cool temperatures and shifting wind to facilitate the efforts of the firefighters. And there is even a prediction of some rain next week. All of these factors could significantly improve the chances of containing the fire.

However. Assuming the King fire is stopped this time, we should take this as a wake up call that if we continue with the drought, the southern corridor will present a continuing threat to the summit from wildfires.

Useful Links for following the progress of the fire: