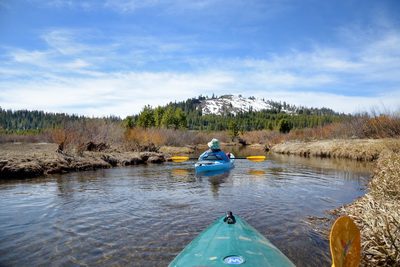 Just two weeks ago we were skiing out on Van Norden after what looks like the last significant snow storm of the winter. This week spring has sprung and the lake is clear of ice and ready to kayak. This has not happened in March in all the 30 years that we have been coming to the summit. I would highly recommend that if you’ve never kayaked this lake, that you get out soon and do a paddle. Not only will the melt water be gone very early this year, but if the Truckee Donner Land Trust goes ahead and drains the lake, this will be the last year that there is a Lake Van Norden. If you haven’t paddled out into the middle of the lake and just taken in the spectacular surrounding summit peaks, you have really missed a special treat.

We expect that the summer schedule is going to be about a month and half early this year. That will probably mean that the water will stop flowing down the Yuba at the end of June rather than the end of July. No telling what the wild flowers will be doing out in the Summit Valley. This year is going to be a new adventure. We wouldn’t be surprised if the Camas Lilies bloom and are gone by the middle of May.

Here is a little peek (pun intended) of our first kayak trip out on the lake this week. This should give you an idea of what to expect if you venture out there.