Monster storm in a monster winter

Much of the information on this site discusses the winter snows on the summit. Well this week there was a monster set of storms that may put the snowfall for this year over the already impressive record from 1938 (65 ft 0f snow).  The storms dumped 13 ft of snow during the week with 8 ft in just 3 days. The common comment from everyone on the summit this week is “I’ve never seen it like this”. The pictures below tell some of the story, although they do not convey the relentless snowfall over the week and the utter chaos it caused. While the storm was a monster, the conditions that resulted were magnified by the large amounts of snow that had already fallen all winter. 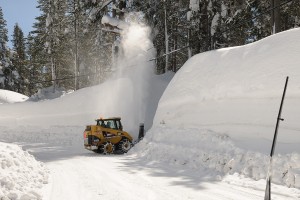 The real problem this week was the fact that there was no longer anywhere to put the snow. The banks along the roads were 20+ ft high and even the large county blowers were having trouble throwing the snow over them. For residential driveways the problem was even worse with the smaller snowblowers simply unable to remove the snow. As discussed in a previous post about snow removal, the system is designed for an average year with average sized storms. Driveways can usually be plowed in less than 5 min and the number of drivers and blowers are designed to handle all the driveways in a couple of hours. Under the conditions last week it was taking 15+ minutes to clear just enough space for a car in a driveway. Part of the reason was the severe avalanche danger in the steeply walled driveways that would let go and easily cover a plow (which could take as long as an hour to dig out). Clearly not all the driveways could be cleared during the storm. The large county plows fared no better, and were able only to keep a single lane open on many of the main roads while the peripheral roads were impassable.

Before and after storms

Getting to summit was also an ordeal. Chain controls were in affect all week and much of the week Hwy 80 was closed due to white out conditions and accidents (including a 45 vehicle pile up). For those stubborn enough (dare I say crazy enough) to wait 8-10 hours to get up here, they were met with impassable roads and driveways, often meaning they had no where to stay. It was especially tough for renters who had little experience with these conditions. And if people could dig into their cabins, that was where they stayed for much of the week because most of the ski resorts were closed due to the weather.

As this is written the storms have finally abated and the sun has come out to start melting the snow. This, however may just be start of a lot of problems for property owners. As discussed in a previous post, the large snowload has put extreme weight on propane tanks and there are many leaks being discovered. As a matter of fact as I write this there are several fire trucks around the corner with flashing lights trying to find a leaking propane tank. Thankfully there have been no serious accidents yet. Another serious and potentially dangerous problem for many residences is the breakage of power and telephone cables. The snow banks are so high that they have engulfed the lines and covered many in 2-10 ft of snow. 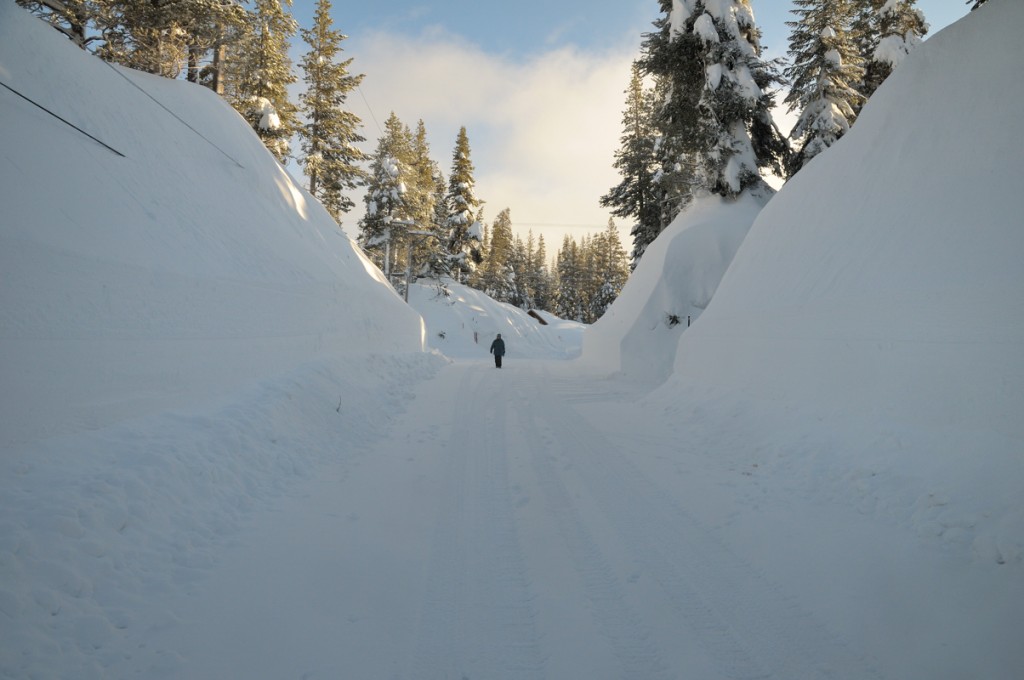 This was OK when the snow was light and fluffy, but now as the temperature warms up the snow is settling fast and as it settles it puts tremendous weight on the lines and easily snaps them. 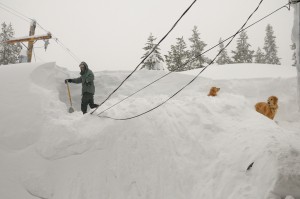 I speak from experience on this point as the pictures below show. Our power line was covered by 5 ft of snow (the lines are 20 ft off the ground and the snow bank is 25 ft high). At 5 am one morning during the storm we awoke to flashing and popping of appliances and lights. At first we thought we just had a power surge, but the lights were incredibly bright and the power was fluctuating dramatically.To prevent a total meltdown  we turned off the main breaker and called PG&E. Long story short, the neutral cable in the braided power lines had snapped due to the snow load and we were advised not to try to turn on the power because it could be dangerous. Fortunately, we are well seasoned residents of the summit and had our back up generator to provide power for the basics. Unfortunately, we discovered that our furnace was not on a surge protector and the control circuits had been fried by the power fluctuations. That meant firing up the wood stove for the next five days until the furnace could be repaired. The lesson learned here is use surge protectors on sensitive equipment (we did have surge protectors on all our computers and home electornics). 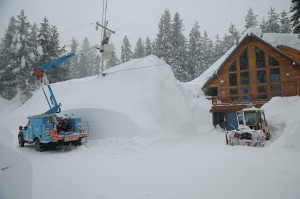 PG&E to the rescue

A PG&E repairman showed up two days after the break (when the roads were open and he could get through) and informed us that the neutral line was probably broken in the snow bank and they wouldn’t be able to fix it until they got some heavy equipment in to dig it out. I told him I would dig it out and it took two hours to dig up to the top of the bank and get it out. The following day the PG&E guy came back and with the snow blowing all around him he got in his cherry picker and fixed the line. With the exception of our furnace, we were back to normal.

The point of this story is that there are probably many cabins in the summit area in which the power and/or phone lines are imbedded in snow banks and many of them are going to experience the same damage in the next week or two. If anyone experiences similar problems with their power as described above they should shut off their power and call PG&E. This can lead to serious problems for owners that don’t come up often and just leave their heaters on to keep the pipes from freezing. Loss of power can mean broken pipes and flooding if the water is not turned off. This can also be a serious problem for people renting their cabins because renters coming up may find cabins with no power. Although not as serious, phone problems should be reported to AT&T. Obviously, the utility people will be very busy in the next few weeks so people will have to be pretty patient.

This last week on the summit has definitely proved the adage that there “can be too much of a good thing”. As with everything, however, this will pass and the summit will return to a place of beauty and fun. On the more positive side, many of the ski resorts are announcing extensions to their ski seasons. As a matter of fact, we’re off to Sugar Bowl tomorrow for a sunny day on the slopes with excellent snow conditions.

5 Responses to Monster storm in a monster winter