A week has gone by since the “big storm” and the summit is now experiencing the aftermath and it’s not pretty. In just the kind of extreme weather change you can expect on the summit, the temperature went from a daytime high of 32º during the storm to  a high of 60º the second day after the storm ended. At this temperature the huge amounts of snow started melting and much more troubling, the snow began to compress. In fact in the three days of 60º temperatures, the snow compressed 3-4 ft from the towering levels of light fluffy snow that had fallen during the storm. 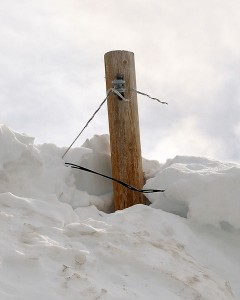 The quick compaction of the snow immediately led to problems. In the same way that our power cables had snapped as described in my last post, hundreds of power and telephone lines attached to cabins in the summit area had become embedded in the snow. With the rapid compaction, many of these lines also snapped leaving cabins with no power or telephone service. Because the telephone lines are strung lower than the power lines, there were many more telephone lines lying in the road or protruding from snow banks. With the crushing weight of the snow, the power lines exerted tremendous force on the power poles in the area and it was hard to spot a pole that was not leaning in one direction or another. A pole in Serene Lakes cracked under the strain leaving it leaning precariously over the roadway. PG&E fixed the broken pole and dug out many of other power poles to reduce the pressure on them. The force of the snow on the cables also resulted in the facia boards of many cabins being cracked an/or pulled off the front of the cabins. In an effort to alleviate the damage, PG&E crews combed the area and cut power lines at the poles and/or houses. The result was that hundreds of residences were left without power. This can be a significant threat for water pipes freezing in a home if the water lines in the house have not been drained and the supply turned off . As this is written,, temperatures in the summit area are cooling off again with the night time temperatures falling into the low twenties. Flooding of cabins from broken water pipes is a real concern and will probably be responsible for additional damage. 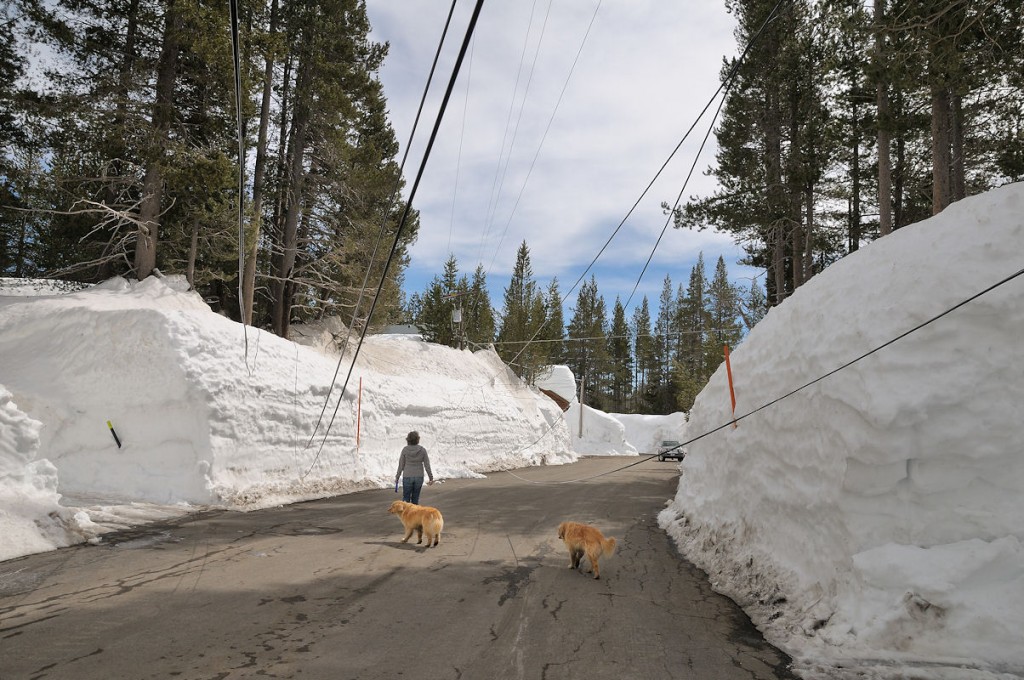 The compaction of the large snowbanks has also led to a more serious problem of propane leaks in the summit area. In the three days after the storm there were at least 8 propane leaks in the summit area and new ones continuing to arise as the snow settled. The problem was exacerbated by the high snow that had completely covered the tanks and their marker poles. Fire personnel were unable to locate the exact location of the leaking tanks and unable to shut them off. The result was that the smell of propane saturated the air throughout the summit area. It was necessary to bring in heavy equipment to dig into the snow banks around a cabin with a leaking tank to locate and shut off the leaks. Truckloads of propane saturated snow had to be trucked up to Royal Gorge parking lot and spread out to dissipate the propane. There were multiple road closures throughout the area due to these leaks. Propane danger became so severe that PG&E was forced to shut down power in many areas because of the power line problems. Broken neutral lines (see previous post) can cause unstable power with surging and sparking. This could be a catastrophic combination with pools of leaking propane. One of the ramifications of this threat is that this article was started using generator power. Placer county issued a bulletin warning of the danger. 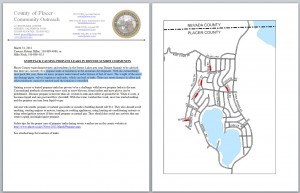 Truckee Fire, Placer county and PG&E are working together as this article is being written to safely restore power to homes in the area. They are inspecting cabins and red tagging ones in leak areas. Safe cabins are being marked on snow banks in front of the cabins by Truckee fire so that PG&E can restore power safely. As this is being posted, power has now been restored to most parts of the summit with the exception of those lines that have been broken or cut due to the snow load or if the danger of leaked propane persists. Because many of the homes without power are unoccupied, PG&E is not restoring power unless the residence is occupied and has been cleared by Truckee Fire. This can be a problem for any rental cabins that have been red tagged and/or left without power. It is probably a good idea for owners to check with Truckee Fire and PG&E to make sure their cabins are safe.

Many people reading this are probably thinking “What kind of crazy people live up there?” Well as one of those people I can tell you that the hardships that a natural event like this bring are not a pleasant experience. However, just about anywhere on this planet, nature has its way at one time or another. Hurricanes in the east, tornadoes in the midwest, earthquakes anywhere in the world. Fortunately these events are rare and do not detract from the normal beauty and pleasure of an area like the summit. This winter may be one for the record books, but as with everything in life, “there is always next year”.

Gotta run now. The skiing at Sugar Bowl should be great today!

One Response to The aftermath…