In this second installment about open space use on the summit, I would like to discuss some of the issues concerning trail use and regulation as it pertains to the trail plan proposed by the Truckee Donner Land Trust (TDLT, see map below). 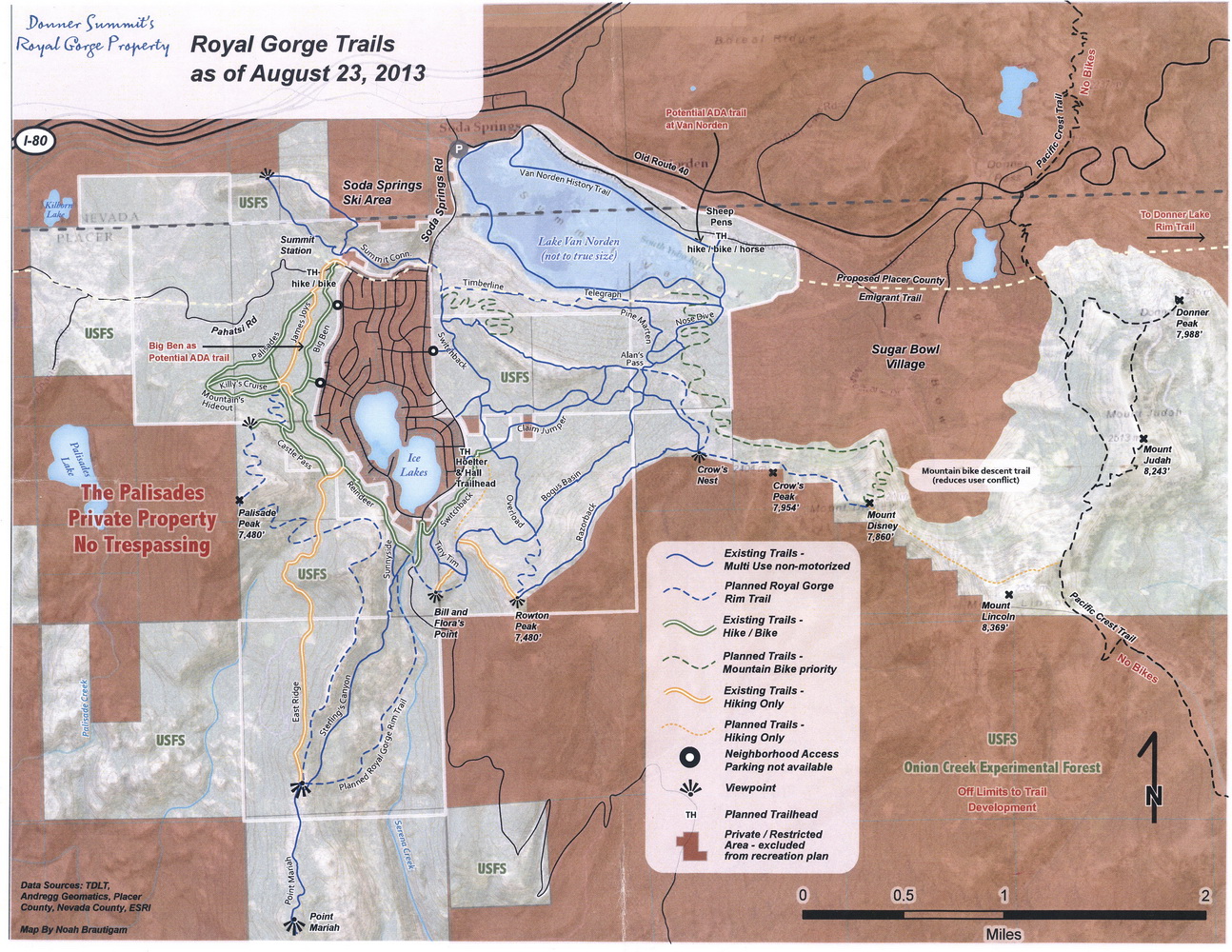 The genesis of this plan as a product of public outreach was discussed in the previous post. TDLT has stated that the intention of the plan is to provide equal recreational opportunities to the diverse user categories while protecting the natural environment of the Donner Summit area. Toward that goal the plan utilizes a network of multi-use trails that will allow equal access to most of the open space area by the three major groups of users; hikers, mountain bikers and equestrians. In this post I will discuss some of the issues that have been raised about hiking. In subsequent posts the issues concerning mountain bikes and horses will be addressed. 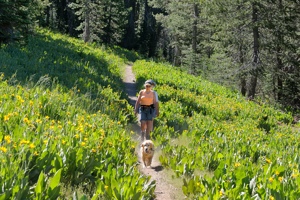 For this discussion we will define hiking as walking across country. I have heard some people say that walking is somehow different than hiking but by this definition we are just talking about where the walking gets done. I have also heard people say that trail running is different than hiking. I would agree with that in the sense that the pace is elevated, but both activities consist of accessing the trails propelled simply by foot power with no added equipment (ie: a mountain bike or a horse). The impact on the trail for each individual hiker is their two feet alone. According to the TDLT public outreach survey hiking is the most popular trail use activity. Since the TDLT trail plan was proposed there have been a number of objections to the multi-use aspect of the trail plan that primarily promote hiking as higher valued activity that should receive priority over other activities. I would like to discuss a few of these objections here.

The gist of this argument goes something like this – humans have been walking (hiking) for hundreds of thousands of years and therefore hiking should have a higher priority on the trails. A variation is “I’ve been hiking the trails around here for ___ years (fill in the time of your choice) and I should have more right to them than another user that hasn’t been here as long as I have”. Most of us that visit the summit have our favorite trails and it’s just human nature that you start the think of them as “yours”. This seniority argument however is really a can of worms. Does it mean that us older folks have priority over younger people. And what about the kids. If we go back far enough then none of us should have access to the area. After all the Native Americans were tramping through the summit (probably on some of the same trails) thousands of years ago. Even in more recent times, people on horseback have been riding through the area since pioneer times. Shouldn’t people on horseback have as much priority. And so on and so on.

The reality is that open space land by definition should be accessible to everyone as long as they treat it with respect and do no harm. The trail system being proposed by TDLT is designed with good trail practices to provide a sustainable system with equal access and minimum impact on the land. Some sort of temporal priority implies that some users are more equal than others which defeats the purpose.

This argument has manifested itself as a request for trails that are exclusive to one use (ie: hiking only) so that there is an “equality” between multi-use and exclusive use. This argument is really based one three faulty premises.

The first premise is that hikers can’t have a quality hiking experience on a multi-use trail and in order to have one they need an exclusive trail. This is just not the case. I can safely say that I have hiked every inch of the proposed trail system numerous times. During the summer Linda and I with our three blonds hike the area almost every day. I can count on the number of times that we even see another hiker (or biker) on less than my own ten fingers. This is not really surprising if you do a little simple arithmetic. There are approximately 29.5 miles of trails specified in the TDLT plan. Even if you assume that on any random day there might be 200 other users out on the trails at any one time (and this would really be a super crowded day) there would still be 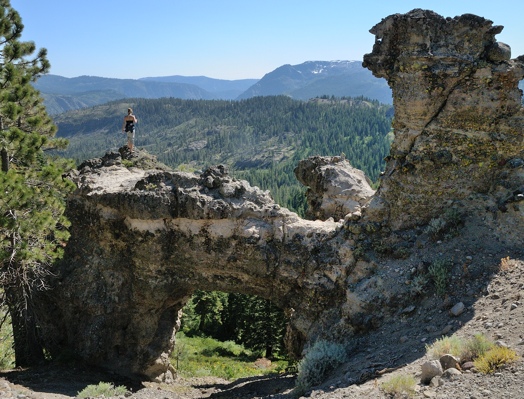 That’s over 2 football fields distance between you and another user. Now of course this is pretty simple minded and assumes a completely random distribution, but it does make the point that there is really a lot of space out there. The fact that a trail is multi-use won’t have much affect when the density of users is so dispersed. A hiker in a multi-use system has access to 100% of the trails and in the Royal Gorge open space it should be possible for any hiker to pick a route in the area that will result in a quality (and solitary) outdoor experience.

The second premise is that equality is achieved by trying to provide equal numbers of exclusive use trails. Does this mean that there should be equal numbers of hiking only, biking only, and equestrian only trails? There are a finite number of trails and often only one or two to particular area (ie: Mariah Pt). Does this mean that one group gets access to a specific area and others don’t? How is this egalitarian? In a multi-use system every user has equal access to all of the trails and all areas.

And finally the third faulty premise is that it would be possible to enforce a regime of exclusive use trails in the sparsely populated open space area. Let’s face it, it is impractical for any agency to constantly patrol the 3,000 acres of forest that make up the Royal Gorge open space area. Even if a plan for exclusive trails was implemented, people would find it hard to understand why they should not use a particular trail when no one else is using it. I think a system of mutual respect and conscientious trail etiquette by all users would be much more effective in preventing trail conflicts and insuring a quality outdoor experience. Sure there are always going to be a few people that abuse the system, but it is really counter productive to restrict every one’s access to counter the behavior of a small minority of users.

I have to admit that this objection leaves me scratching my head. When you look at the trail plan proposed by TDLT superimposed on a satmap of the area it is easy to see that the trail system is simply utilizing existing cross country ski trails (which utilized existing logging roads). The reality is that there is a much more extensive network of established “trails” and TDLT is using only a small subset of those existing trails for their system. As you would expect with a ski trail (or logging road) it is pretty wide and relatively straight. In fact the existing trails make great multi-use trails because they provide plenty of space for the rare interaction of users and they provide good sight lines to give people plenty of notice if another user is approaching.

It is important to keep in mind that the Royal Gorge open space area is a wonderful natural area, but it is not a pristine wilderness. The area has been trodden extensively since pioneer times and exploited many times over. The area was extensively logged on many occasions (hence all the logging roads) and been the subject of various ventures, most recently the proposed development by Foster-Syme. Nature has done her best to repopulate the area, but the effects of years of logging have taken its toll. The current forest restoration project underway by TDLT should go a long way toward eventually establishing a healthier forest. It will not, however, result in an area resembling a natural wilderness for generations. TDLT is trying to provide access to the area as soon as possible and it is only logical that they would use the existing trail system. While their plan does call for the addition of new single track trails in the future, it seems reasonable for them to make the most out of the existing trail systems.

It should be noted that TDLT did modify their trail plan to include about 3.5 miles of trail designated as hiking only. While I have expounded on why I don’t see the need for it, I do applaud their effort to respond to the feedback they received from their outreach program. It does demonstrate that they are willing to apply oil to the squeaky wheel. Of course you always have to be careful not to apply so much oil that the wheels come off. No one can predict with complete certainty how the trail system will work out. As users get out on the trail system this summer, we will see where the kinks are and TDLT will be able to make modifications through signage or redesign to handle any problems. My feeling is that we really need to give the plan a chance.

Stay tuned. Mountain biking will the subject of the next post.