In the last two years there have been historic changes in the status of land ownership and use at Donner Summit. Due to an momentous effort led by the Truckee Donner Land Trust (TDLT), over 3,000 acres of land formerly held by the Royal Gorge Ski resort was acquired and  turned into publicly accessible open space, free from the threat of development. In the last year, since the acquisition, TDLT has embarked on an extensive public outreach program to formulate a usage plan that will meet the needs of the majority of the user community while practicing responsible stewardship to protect the land. 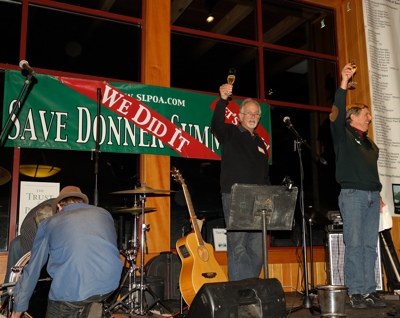 As readers of this blog know it is dedicated to promoting the exploration and enjoyment of the many recreational opportunities available on the summit. The intent of the majority of what is posted here is to facilitate your experiences on the summit. Sometimes, however, there are times when your experience will be affected by policies and decisions made by governing authorities and we feel the need to discuss the issues that are involved. As the summer of 2014 approaches there will be important policies and plans implemented by TDLT that will regulate access to a the Royal Gorge open spaces (see my previous posts on this subject). The subject of this and subsequent posts leading up to the summer season will be the discussion of issues that have been raised by the user community concerning the regulation of open space use.

Just to be clear that you know where I’m coming from. The opinions expressed by me, George Lamson, as author of this blog are entirely my own based on my interpretation of the data that is available. I have no official affiliation with any group or regulating agency including two of the major players,  TDLT and the Serene Lakes Property Owners Association (SLPOA). Having said that, I am a strong supporter of both of the above organizations and did participate extensively in the public outreach programs sponsored by them. Lest you think I am a total fanboy, you might want to check out one of my other websites that demonstrates when I believe the facts warrant disagreement. 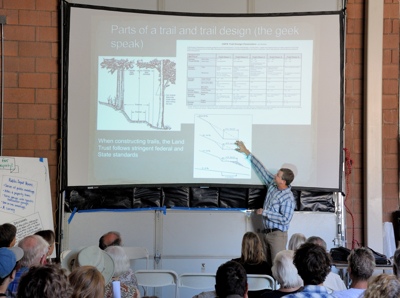 I would like to start this series of posts off by doing a brief review of the outreach process that has led up to current proposed use policies and regulations under discussion. This is necessary because there have been objections made that the process was not entirely open or complete.  I would also refer you to the TDLT outreach website where you can see the documents and data that I am going to be referring to.

During the fundraising and acquisition efforts in 2012 to purchase the Royal Gorge properties TDLT clearly stated their intentions to make the properties publicly accessible open space and committed to a public outreach program to gather a consensus of the user community on the use policies for the property. That was borne out by a 4 month program  starting in June 2013 in which TDLT staged a series of public meetings and focus groups with a diverse audience to gather user input. Having attended all of the meetings and some of the focus groups I can attest to the fact that they were well organized, well attended, and thorough in capturing input from all the attendees. In addition, TDLT implemented a web survey form on their website that they heavily promoted and had over 600 respondents (see the survey results). 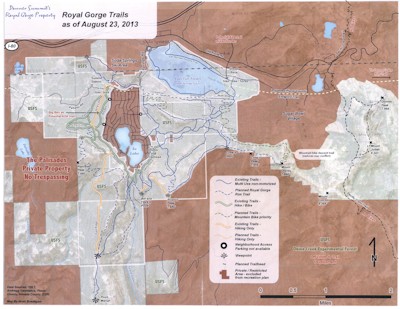 From the preliminary meetings and survey results, TDLT proposed their initial trail plan in mid July and presented it in different venues on the summit. I was personally involved in the meeting at the Serene Lakes Fire House. It was obvious at that meeting that there were diverse reactions to the plan and while the overall plan was well received, there were concerns raised about several issues. To TDLT’s credit, over the next month they considered the feedback that they had received along with more survey and meeting input and modified the plan to address some of the major concerns. The proposed modified plan shown here is their current working model that will be implemented starting this summer.

The details of the plan will be discussed in subsequent posts. The point I wish to make here is that TDLT conscientiously fulfilled their outreach commitment to the user community. The results of their outreach are fully transparent and are all available on their website (see the full outreach report) . I am not saying that they contacted every single person that might have had a concern. I am saying that they made a every reasonable effort to provide an input channel for everyone that had a concern to give their input. You can provide a very large trough but you can’t make every horse drink from it.

There is a final point that I would like to conclude this post with. Even though the outreach effort was successful and a comprehensive collection of user concerns was gathered, it does not mean that every concern could be satisfied. If you put yourself in the role of TDLT you have to realize that they have to consider the needs of the many (as Mr Spock would say). Consensus does not equate to unanimity. It is impossible to meet the needs or demands of every constituency and maintain equal opportunity. Everyone has to give a little. In the next post I will discuss some of the more controversial issues that have arisen in detail.